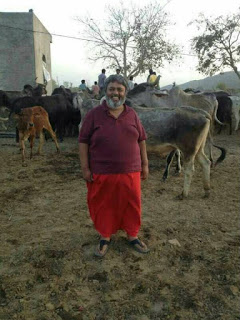 When i move through the illusions of the world,
i get distracted often, stumbling on the unreal
Many things that don’t align with the highest truth
An imperfect world judged by my imperfect views
Overwhelmed at times at the crimes on this planet
Shaken by the heartlessness of souls
Confused by the dissonance of speech and actions
Minds battling with gods and devils within
Pained often by the piercing words and actions of others
A feeling that this world doesn’t belong to me
Or more that i do not belong to this world

And then, amidst all the play of duality,
My hope strives when i see the possibility…
possibility of penetrating these qualities of life
A living possibility, when i see my Gurudev
Firmly grounded in the divine connection
Amidst the forces of all kinds
Living with the common habits of the planet
Playing an ordinary role along with everyone
Yet playing a special role to millions
who strive to be like him, liberate like him

An unshakable man from his visions
A silent but immensely powerful dreamer
A man of actions and not just of words
A man of simplicity, grace and strength
A man with the most simplest needs of life

Don’t know how many years it has been
That i see him wearing the same attire
the same footwear for decades probably
Who can be content with groundnuts for lunch
And a banana for dinner
And if the need be, survive without them too

Praying for the good and bad alike
Being tough with the smoothest
And smooth with the toughest
All for the highest good of all
Playing every role that a human can think of
Father, mother, teacher, guide, prophet, guardian
Yet confuse one in contradictory ways,
For he is bound not with man-made laws
But adapting to them, only for reasons
That great men like him always carried on earth for eons
Divinity has always had her child manifest
for bringing the scattered souls back home
Here is yet another child of the divine
Who we are fortuned to have known,
to have experienced, felt and been touched.

I often wonder, that when we need solace,
We run to him for help, for liberation from miseries.
Then i always wonder with so much of awe
who will he turn to if he needs someone
Then i watch him silently tune to
None in this realm, but the Almighty
For that is his abode, there is his solution

This is why millions look up to him,
for in him they see a living possibility
This is why people fall in love with him
because they see a part of their soul in him
May all be blessed to achieve the goals of human life
Just by contemplating on this form of the Divine..
Divine Love and Light
~ Jacob Shivanand